What would you do if your mother developed CRPS and was in constant unbearable pain?

That’s what has happened to Charles Mattocks, a successful chef, actor, author, producer and diabetes advocate.  In 2008, his mother, Constance Marley, sister of the late Bob Marley, was diagnosed with the disease.

Upon seeing his mother’s suffering, he was compelled to reach out to others to hear and document their stories.

Unable to stop their pain, he decided to produce the documentary film called “Trial by Fire” to raise awareness and hopefully fuel a movement to bring help to people suffering from the effects of this disease.

Trial by Fire has been called a moving piece that will open people’s eyes about CRPS and create a lasting impact on its viewers.  The film has been selected to be shown at a variety of film festivals around the country and is stacking up film festival awards, including best director and best documentary.  Mattocks says the documentary film is just the start of his journey and pledges to continue fighting to raise awareness and pushing for the development of better treatment options and an eventual cure.  He hopes that the film will inspire people to treat CRPS sufferers with the dignity and respect they deserve.

Trial by Fire can be viewed online for a rental charge of $7.99.  Click on the video link below to watch the official film trailer: 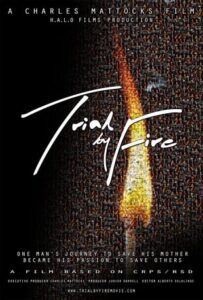 The tragedy of CRPS is gaining awareness thanks to the efforts of people like Charles Mattocks.  Heintz & Becker congratulates Mattocks on the success of his film Trial by Fire and wishes him continued success.  If you or a member of your family developed CRPS after an accident caused by someone else’s negligence, our experienced CRPS injury attorneys may be able to help you seek financial compensation for your suffering and medical treatment.  Call us today to schedule a free CRPS case review.